We huddled around and watched intently as Dustin, Ian’s extraordinary hospice nurse, disconnected the tube that snaked out of the port in Ian’s chest. With clean, gloved hands, he meticulously wiped both ends with antiseptic wipes.

“Next, insert the needle into the vial to draw out the dose of Dex into the syringe,” Dustin instructed and demonstrated in a deliberate and patient manner.  “Then point the needle up and push gently to remove any air.”

This was the most important crash course we would ever take in our lives. Dave, Zach, Lei and I were suddenly intimately involved in not only loving and supporting Ian, but trying to sustain his very life. Now, together with hospice nurses who visited daily, WE were Ian’s new medical team.

Ian’s surgically installed port, once used for the administration of chemotherapy, was now called into duty for other purposes. A split line delivered self-administered pain medications through one side, while the other side was available for ongoing daily doses of Dexamethasone, an anti-inflammatory medication prescribed to help keep swelling down in his central nervous system. It was our job to administer Dex intravenously four times a day.

Among its many harsh side effects was insomnia. Ian knew that if his body had any chance of fighting, rest was critical. Determined to control what he could with his now precarious, precious life, Ian determined to forsake western medicine that unfortunately failed to eradicate the cancer. He requested that the doctors wean him off of Dex and all pain meds.

Ian had made up his mind. He would keep fighting, but he would do what felt right to him now … no matter the outcome.

Leaving harsh meds behind him, Ian dove headlong – as he did with everything in life – into naturopathic treatment. The seed of this idea was first planted by some of the surfers who had visited him the week prior, and then further nourished by his cousin Ryan who had battled – and won – against cancer in this way for many years.

Ryan visited as soon as Ian got home from the hospital to share the details of his compelling story, as well as vital information about fighting cancer naturally. He recommended a book on the subject, and each one in our household devoured it to gain insights.

Dustin remained 100% supportive of Ian’s new quest and provided the best hospice care possible … with compassion and hope. Some of the hospice workers often brought up things like Bucket Lists and End of Life planning (it was their job.) But, not Dustin. He helped to wean Ian off meds, provided the evolving ongoing care that was needed and then talked about surf swells and sunny days. It was the best medicine … for Ian.

Soon, Ian was also under the care of a well-respected naturopathic doctor in Honolulu. The doctor would do everything he could, but he was also very honest. After our first visit, his assessment: We’re in the 4th quarter, and we’re down by a few touchdowns. However, he was impressed with Ian’s optimistic disposition and he, too, believed in miracles.

There was a glimmer of hope and Ian clung to it.

Aunty Rae purchased a juicer and Ian quickly started an all organic and juicing diet: whole foods only, no sugars, no meat. Fish was permissible. He was prescribed a slew of supplements. This was not an easy diet. Weight loss for an already underweight Ian was a huge concern. Zach was already familiar with many of the naturopathic tactics and so committed to doing the diet perfectly with Ian. Dave purged the pantry of junk food. We were all in this together.

Soon, we were juicing 70+ ounces twice daily and cooking scratch organic meals three times a day. Instead of driving to hospitals and doctor’s offices, we were driving to Down to Earth. Within no time, Ian felt a surge in his health.

Purging harsh chemo toxins from his body and filling it with God’s bounty felt so very right to Ian. His spirit soared.

Each day, Ian and Dave awoke early to enjoy morning sunrises on our back patio, when the air was crisp and oxygen levels are said to be at their best. Ian, Lei, Dave and I also gathered on the patio for daily Bible devotions.  Ian journaled and drew closer to God with each passing day. We all did. The photo featured in this post was taken on one of those glorious mornings in mid-August.

Family and friends came alongside Ian.

Grams came daily to help with the unending duties in the kitchen. Aunty Nani and Uncle Kevin visited with homemade organic meals. “Honey, every single ingredient is organic!” she proclaimed. Other cherished friends and neighbors provided meals, too. Uncle Pat and family came often, bringing Uncle’s special brand of humor that did Ian’s heart so much good. Uncle Darren and Aunty Jodie visited and Ian scored a Darren Ho signature skateboard deck.

Kawai (and his precious daughter) came and sat with Ian for hours, discussing health, diets and surf.  Ryan visited again to check on Ian’s progress. Together, they talked about and appreciated the simplest things in life, I suppose the way only people who faced death up-close can.

Nick printed up shirts with Ian’s photo on the front – one for skate and one for surf – and sold them to help raise funds for the expenses that were no longer covered by medical insurance. The shirts rocked Ian’s world. Friends at Xerox purchased dozens. Erik developed Art for Ian on Instagram.

Pastor Glenn and all the prayer warriors from New Hope Kapolei kept hope alive, joining us in prayer for a miracle. Donna and Jeff brought worship music straight into our living room. So very many prayed for Ian, requested mass dedications and sent cards, texts and even heartfelt handwritten letters.

I know my memory fails me and dread that I’m forgetting some wonderful things done for Ian during this time. (Forgive me!) Beyond our immediate family and Lei’s, friends from all circles of Ian’s life came to the house to visit…and sit…and talk story. 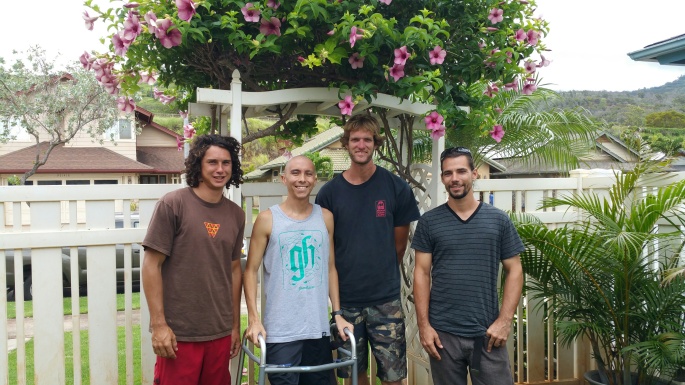 Suffice it to say, Ian was not alone on this journey.

It was a Saturday, when Ian, feeling a surge in health and hope, made a special request. His 23rd birthday was coming up in a week, on August 29, 2016, and he wanted to have family and friends over for a backyard BBQ. I told him that I’d do the food if he and Lei did the inviting.

There was an “End of Life” planning brochure that sat on our dining room table. It was part of the hospice outreach efforts from one of the very well-meaning members of the team. Ian never looked at it.

So, he grabbed the disregarded brochure, flipped it over and began writing down an invitation list for his Birthday BBQ. If only our tiny backyard was bigger, then he would have invited each and every last one of his friends, but instead he came up with a list of family and friends who could fit under a few small pop-up tents.

Ian was in a good place during the week leading up to his birthday. He got dressed and got out of the house a few times with Lei — just down to the store, physical therapy and such. But, he so very happy. With a lot of support, he even made it to Koolina for a swim in the lagoon. 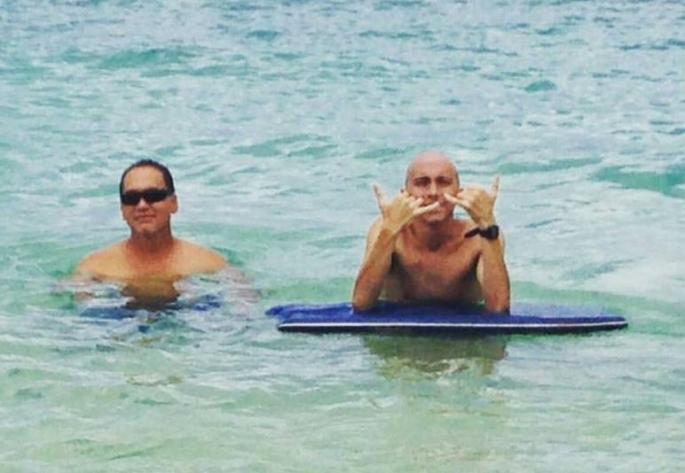 On the day of the BBQ, Ian took me on the side and said he wanted to say the prayer before the meal that evening. There was a special reason for this, he explained. “Some of my friends might not know Jesus,” Ian told me.

“I want my friends to know about my faith.”

So, we gathered that evening in a large circle, and Ian blessed the food and everyone there.

It was a good night.  A true Gift of God. 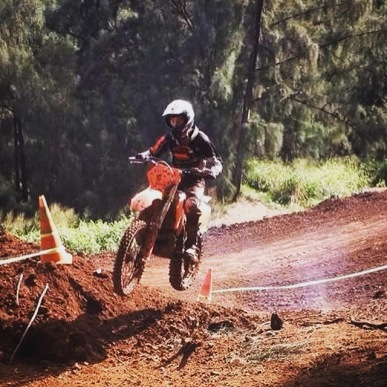